NOTE: The following story discusses the topic of suicide.  If you are feeling suicidal or have suicidal thoughts, visit the National Suicide Prevention Lifeline or call 1-800-273-8255.

Kentucky resident Tammy Brewer is one of eleven children. Her father served in the Army and owned his own appliance store. As the years went on, her father’s behavior started to change.

Tammy’s father was diagnosed with the gene that causes Huntington’s disease (HD). This is a fatal genetic disorder that causes the progressive breakdown of nerve cells in the brain. It deteriorates a person’s physical and mental abilities during their prime working years and has no cure.

He developed symptoms including tremble of hands, rocking back and forth, facial tics, angry outbursts, involuntary movements (walking like he was drunk), and had slurred speech. The symptoms of HD are described as having ALS, Parkinson’s and Alzheimer’s – simultaneously.

According to Tammy, her father wanted to go to a cave and for nobody to find him. One day, Tammy’s father took his own life and her young nephews were the ones that found him. After finding their grandfather, Tammy’s nephews would go to therapy.

Their father had five biological children including Tammy that were now at risk for HD. Every child of a parent with HD has a 50/50 chance of inheriting the faulty gene.

Her older sister had four children and worked in a hospital. According to Tammy, she dealt with an increase amount of stress. While assisting a patient, she forgot how to use a fork and knife when feeding someone. She would also forget the exit to get off.

Then, the symptoms started to progress as she was bouncing from job to job which was odd behavior for her. One night, she would walk in the rain and got lost. There was difficulty walking up stairs and thought there was a demon in her apartment. After all this, Tammy would take her to a family doctor and was sent to a neurologist. 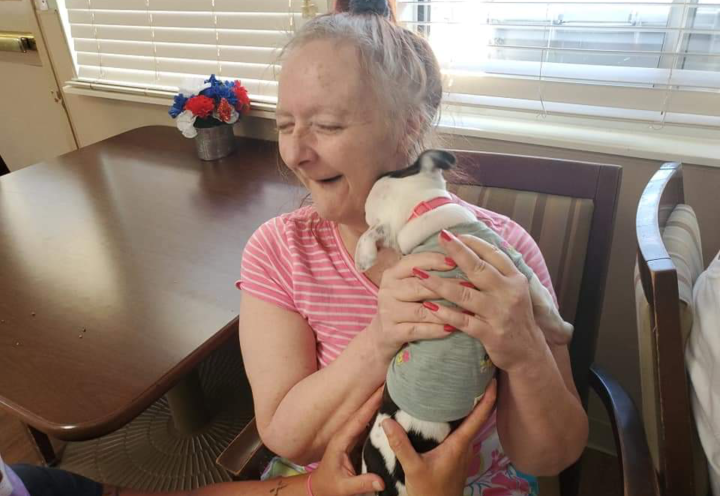 Her sister tested positive as Tammy immediately got tested and encourages those to not hesitate. She noticed similar symptoms in her son. However, Tammy tested negative and her son was diagnosed with bipolar disorder, associated with episodes of mood swings ranging from depressive lows to manic highs.

Tammy suffered with survivor’s guilt as another sister tested positive. Tammy wanted to be her caregiver, but her symptoms were too progressive.

There was an incident where her sister accidently started a fire in the kitchen. The police then handcuffed her to the ground thinking it was intentional. There have been documented cases of people with HD having difficult interactions with law enforcement because their symptoms are misidentified, misunderstood, or mishandled. To read more, click here

She got helpful information from a social worker in Indiana and her sister was placed in a nursing home. Her sister’s son was in a car accident as he was suffering with memory loss. He thought it was from the car accident but also had hand tremors. He also tested positive.

Another sister tried to get tested in Missouri but was denied because she did not have any symptoms. According to the doctor, they wanted to make sure that she can cope with the results.

Tammy has a message for the HD Community:

“Hang on to hope. It is hard and mind blowing but never give up on hope. Recognize the signs.”

To learn more about Huntington’s disease and the work of the Huntington’s Disease Society of America, visit www.HDSA.org or call 1(800)345-HDSA.