NOTE: The following story discusses the topic of suicide.  If you are feeling suicidal or have suicidal thoughts, visit the National Suicide Prevention Lifeline or call 1-800-273-8255.

After September 11th, 2001, Kentucky resident Nick Gough wanted to serve his country in the Army. He served for more than fifteen years and reached the rank of Major. However, heartbreaking news would lead him to retire earlier than expected.

Nick was at risk for Huntington’s disease (HD), a fatal genetic disorder that causes the progressive breakdown of nerve cells in the brain. It deteriorates a person’s physical and mental abilities during their prime working years and has no cure. Every child of a parent with HD has a 50/50 chance of inheriting the faulty gene.

According to Nick, him, his brother, and sister were told their mother had Parkinson’s disease but this was not the case. While on active duty, he learned that his mother was developing HD related symptoms and a genetic test later confirmed this. 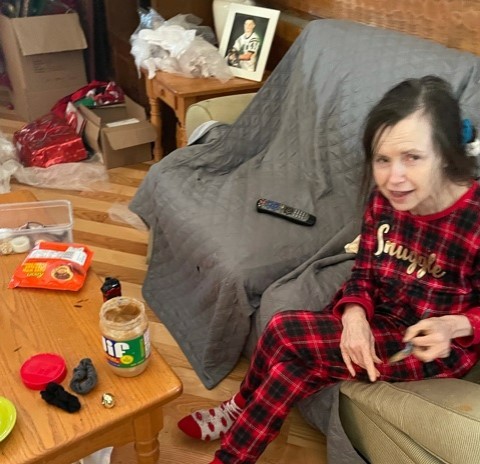 As Nick learned more about HD, his mother’s symptoms were identical to what he read about. Her symptoms included depression, chorea, angry outburst, dementia, tripping and obsessive-compulsive disorder.

“These daily living issues consist of trouble using a microwave or other appliances, hygiene issues, as well as problems with her balance and walking,” Nick explains. “All of her symptoms confine her to her house where she has spent the past 5 years essentially living as a couch potato. Her next years will be even worse because she is already starting to fall more and is becoming more reliant upon caregivers for everything.”

When she was driving, she was pulled over by the police because the police officer thought she was drunk and would soon enough have her driver’s license taken away.

There have been documented cases of people with HD having difficult interactions with law enforcement because their symptoms are misidentified, misunderstood, or mishandled. To read more, click here

“When we realized HD was genetic, we opted to find out whether or not we carried the disease,” Nick explains. “I, my brother, and sister all got tested anonymously out of concern for the possible ramifications of a positive test.”

Nick would get tested at the HDSA Center of Excellence at Vanderbilt University Medical Center. HDSA Centers of Excellence provide an elite team approach to Huntington’s disease care and research. Patients benefit from expert neurologists, psychiatrists, social workers, therapists, counselors and other professionals who have extensive experience working with families affected by HD and who work collaboratively to help families plan the best HD care program throughout the course of the disease.

“The process was incredible,” said Nick. “I received genetic counseling from a research team, genetic screening, and the follow up counseling covered any questions that my wife and I had.”

The results came back and Nick tested positive.

“Upon finding out the news, I tried to keep my positive test result from the military because I wanted to continue to serve until, I was eligible for retirement,” Nick explains.

“Working in a high stress position without treatment became too difficult and I realized that I needed treatment for HD symptoms,” said Nick. “I still feel bad that I didn’t get to serve twenty years; however, I know that my retirement was the right decision for my family and the Army.”

“Working in a high stress position without treatment became too difficult and I realized that I needed treatment for HD symptoms,” said Nick. “I still feel bad that I didn’t get to serve twenty years; however, I know that my retirement was the right decision for my family and the Army.” 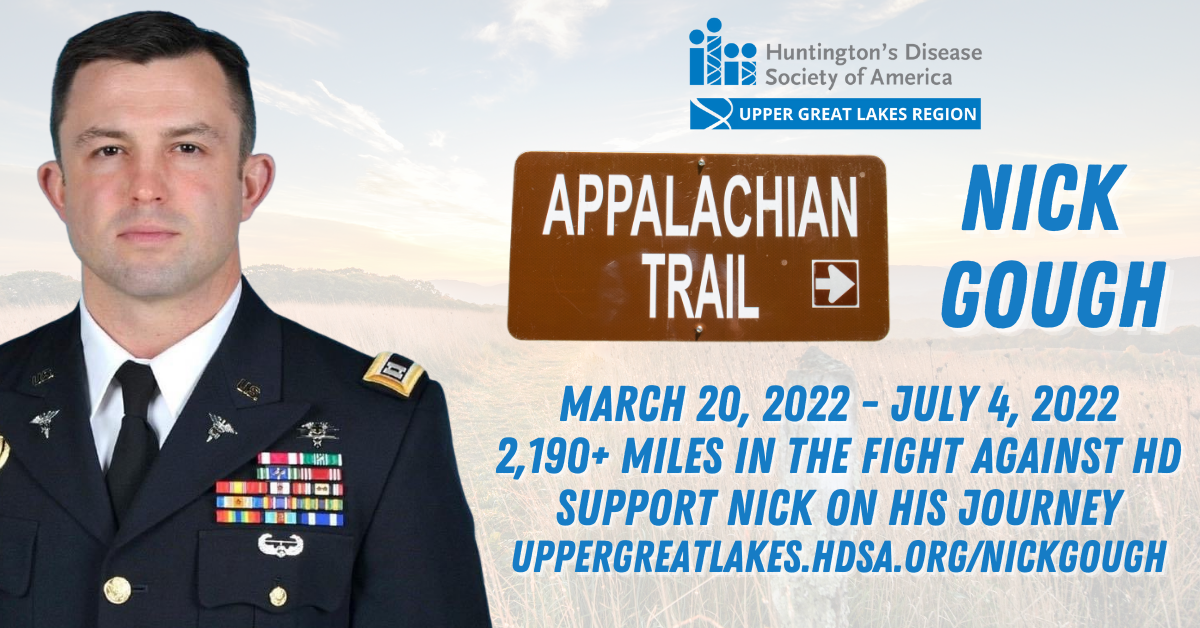 As he assists taken care of his mother, Nick wants to raise awareness in the fight against HD. Alongside his brother (also served in the army), Nick will be walking the Appalachian National Scenic Trail on March 20, 2022. The trail in the eastern United States extends from northeast to southwest for about 2,190 miles along the crest of the Appalachian Mountains. Through his journey, Nick will be raising money in the fight against HD. To learn more, click here

“The purpose of why I am walking is multifaceted,” said Nick. “I want the average person to understand what HD is and why it needs to be cured along with many other genetic diseases. We are entering a moment in our children’s lifetime where genetic disease may be eliminated altogether. Second, my hope is that our family’s story inspires people to volunteer, donate money, or simply share this with people who have the power to make a difference. This may be my last opportunity to do something big and bold due to my own illness. My hope is that when I am one day confined to my couch like my mother that I have the capacity to appreciate the decisions that I have made over my life.”

Nick has a message for the HD Community:

“Try and share your story as much as possible. Stay strong. Enjoy life to the fullest and make the most of it. To those who don’t have a family history of HD; please hug your family a little tighter because you don’t have to worry about whether one of your children or siblings will grow up with this horrible disease.”

To learn more about Huntington’s disease and the work of the Huntington’s Disease Society of America, visit www.HDSA.org or call 1(800)345-HDSA.
Email Share Tweet